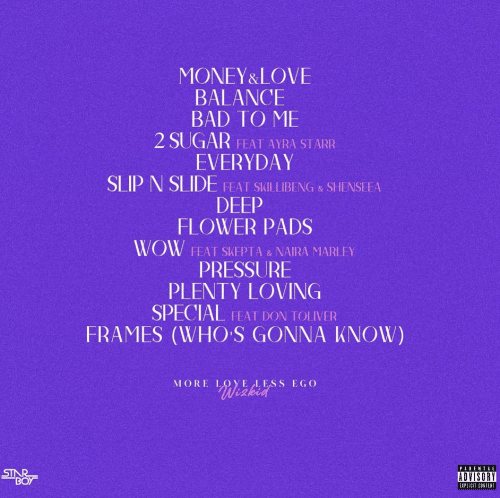 The Wizkid More Love Less Ego album has now been released globally!
With his appearance on Drake’s 2016 smash, “One Dance,” Sir Wizkid (Big Wiz) solidified his position as one of Afrobeats’ leading ambassadors. This opened the door for his third studio album, “Sounds From The Other Side,” which furthered the genre’s delightfully breezy grooves.

In October 2020, he released his fourth album, Made In Lagos.. With a peak ranking of one on the Billboard World Album Chart, it was a commercial success on a global scale. The album included the Tems hit Essence, which climbed at number ten after receiving a remix.The first Nigerian song to reach the Billboard Hot 100 chart was Essence. (featuring Justin Bieber).

Today, November 11, 2022, Wizkid, who is currently the top Afrobeats musician in the world and one of the biggest music exports from Africa, released his eagerly awaited fifth studio album, “More Love, Less Ego,” following the success of the album’s lead singles, “Bad To Me” and “Money & Love.”

MORE LOVE, LESS EGO TRACKLIST
Wizkid’s fifth studio album talks about love, sex, and happiness. He manages to put the bad vibes at bay in the song 2Sugar with Ayra Starr. Because it boasts sensuous lyrics, excellent beats, amazing melodies, and catchy hooks, the “More Love, Less Ego Album” The songs are lit you want to put them on replay..