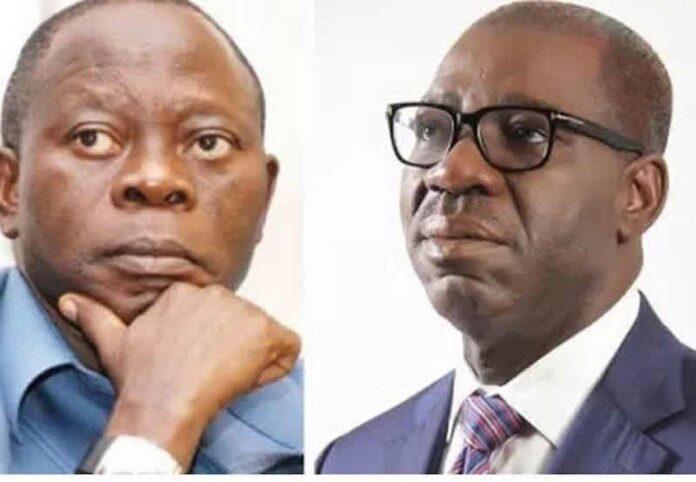 In reality, the defeat of APC nominee, Osagie Ize-Iyamu, by his PDP opponent, Godwin Obaseki, in the Edo governorship election of September 19, 2020, is the evisceration, annihilation, shame and humiliation of Adams Oshiomhole, former national chairman of the APC.

Obaseki never missed an opportunity to remind the world of how overbearing Oshiomhole had become. Also how the former labor leader tried to control how he ran the state as governor of Edo. In this political duel between Obaseki on the one hand and Oshiomhole on the other.

Obaseki said during the governorship debate with Ize-Iyamu on September 13: “Having become governor, he (Oshiomhole) had a personal agenda of his own and he thinks I would be so submissive.

He didn’t realize that I was going to be as independent as I had become. That may have made him furious that he now felt like he was a godfather who could stop me.

Obaseki gave a bare-knuckled warning to Adams Oshiomhole in January. “The suspended national chairman is being alerted. If he continues his work in the State of Edo. I will prove him that I am the Governor of the State of Edo,’ he said.
He did not tolerate a fraction of the misdemeanor and corruption he is currently conducting, when he was governor. I have mentioned that if Adams Oshiomhole comes to Edo here to say that he wants to disturb state and party activities, we will deal with him the way we know how best to do it.

Therefore, the election on Saturday was a battle between Obaseki and Oshiomhole, not between Obaseki and Ize-Iyamu. There were always some monetary gain the winner of the contest was going to earn. Last Saturday, the Edo people went with a supposed survivor of this bitter feud.

The triumph of Obaseki is therefore the annihilation of Oshiomholeand must really hurt him. He became the disgraced godfather who is now facing imminent retirement, just as Tony Anenih and the Igbinedions had retired.

Obaseki now has the chance in the politics of the Edo State to deliver the devastating blow and make Oshiomhole absolutely insignificant.

Given that Obaseki took it all too far by asking Oshiomhole not to visit Edo. In addition engineered the disqualification of his former APC benefactor in Edo. (A step that culminated in Oshiomhole losing the role of APC national chairman), there was an opportunity for Oshiomhole to play the role of the larger man, call for a truce, end the squabble, and retain his godfather status.

Instead, while baying for revenge, Oshiomhole became even more belligerent and orchestrated Obaseki’s disqualification. Also from the primary election of the APC governorship. Some in the APC’s top echelon always feel like that was a mistake on the part of Oshiomhole.

APC stalwarts blame Adams Oshiomhole behind the scenes for the last-minute defection of Obaseki to the PDP and the ceding of the Edo State to the opposition.

Adams Oshiomhole was also frequently blame as the national chairman of the APC for not being a team player; for not taking loyalists of the party along.

He fell out for fun with his party’s governors and ministers. And aso when President Muhammadu Buhari disbanded the Oshiomhole-led APC National Working Committee (NWC) on June 25 , 2020 to end his crisis-ridden rule, in honor of his denouement, some APC chieftains popped champagne and clinked glasses in posh apartments.

The APC media and propaganda arm fell apart on Oshiomhole ‘s watch, younger party members were remove from decision-making processes. And the APC lost elections in states it should have won, owing to one or the other avoidable tactic. That man was always looking at the water.

The APC now has a chance to learn its lessons in Edo and at the core and pick up the pieces of this devastating defeat. When Oshiomhole shed some of his idiosyncrasies and put his hubris in check for the good of the whole, all of which might have been avoided.

Wegotrendhttps://www.wegotrend.com
Wegotrend is the BEST online Entertainment website for your music downloads, videos, Entertainment Gist, News and Amazing Products On sale. We have a wide Range of offers to get your songs and other Ads Trending. We have a good Team of Experts and a massive number of viewers monthly. Follow the CEO on this Platforms for more updates.
RELATED ARTICLES
What's Trending

Jimmy The Pslamist – The Goodness Of The Lord (Live) ft. Peterson Okopi

Jimmy The Pslamist – The Goodness Of The Lord (Live) ft....